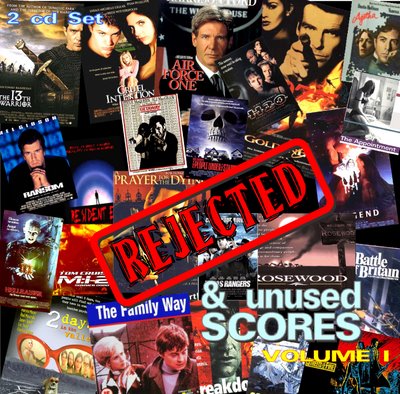 Here's a cornucopia of, well, rejected and unused scores and it's a fantastic selection. It's like the Rejection Hall of Fame's Greatest Hits. A lot of the famous ones are here by some of the top composers in the business.

In some cases, you can understand why it was not used. Not because it was necessarily bad, but because it wasn't quite right for the film. In other cases, like, say, Goldeneye, when you consider that they opted for Eric Serra instead of Michael J. Lewis, you do have to wonder.

This is some fantastic music, so enjoy!

Comments:
This is a great collection. Thank you!

I think I could've written a better score for "Goldeneye" than the score they actually used! Ick.

They should just open their wallets and hire John Barry to score one more Bond.

And without knowing anything about your composing skills, I would have to guess that you are 100 percent correct about that. :))

I've heard that in the past John Barry wasn't interested in doing another Bond score because he had done so many, but I don't know if it's true. It would be great if he would do one more though! (Maybe they could call it, 'James Bond: The Revenge of Eric Serra').

outstanding! Randy Newman's AIR FORCE ONE is one of the most manic themes ever - I suspect it was rejected because the movie couldn't keep pace!

any and all Morricone and Barry (especially unreleased!) are always most welcome.

I suspect you were right about Air Force One. :))

And thanks for the nice words!

Good fill someone in on and this mail helped me alot in my college assignement. Say thank you you for your information.

This is what I've been loking for! Thank you.

Thank you so much! I've been looking for the Breakdown soundtrack for years. Is there a way you could upload the whole thing?

Ennio Morricone never did a score for Resident Evil, and if you know Morricone, you know its not something of him. The score mentioned, is the Biohazard (resident evil) game score by Masami Ueda

On Hold, Future is in Question:

Inert, but take a look (In other words, take a look at my future) - [these blogs haven't been updated for quite a while, may not ever be updated, but may still have something you're interested in]:

Gone (At least as far as music goes), But Not Forgotten: